We are pleased to confirm the completion of the main phase of upgrading the surface of the bridleway (BW2791) between Threals Lane and Greenhurst Lane bridleway. 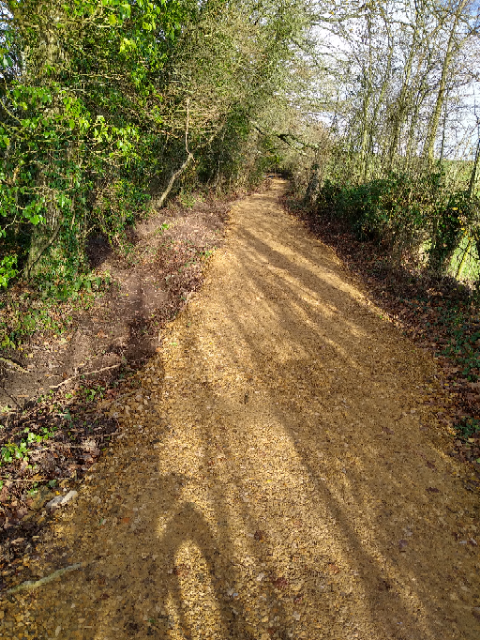 The works have involved completely resurfacing this route, to facilitate all-year-round use by walkers, cyclists and equestrians.  Materials used are WSCC-approved and ecologically appropriate.  As well as the new surface the work has involved substantial drainage improvements, and a new safety chicane structure at the junction with Greenhurst Lane, to address the risk of cylists approaching this crossing too quickly.  We recognise that the safety of this crossing remains a concern and have plans for further future improvements (see Next Steps below).

The Parish Council has used some Community Infrastructure Levy funds (from recent housing developments) to upgrade bridleway 2791 (Threals Lane to Northlands Lane – see map below) to be suitable for all-year use.  The idea is that central Thakeham residents can combine this with the existing upgraded bridleway 3676 (High Bar Lane to Threals Lane) to access central Storrington via a safe walking/cycling route instead of having to use the B2139, which has no pavement and is dangerous between Abingworth and Greenhurst Lane.

Although it is not an ideally direct route, some form of ‘dog leg’ is unavoidable given the topography of the area (the substantial east-west ridge that the B2139 cuts through at Jackets Hill) and the fact that major works to the B2139 have been ruled out by WSCC on cost/benefit grounds.   The Threals Lane route is the best of limited options to provide a safe, all-weather and relatively direct connection.

When walkers reach the south end of Northlands Lane, they have a choice to use Water Lane to reach the Rock Road schools area, or head towards central Storrington via Downsview Avenue – the blue route below.  Cyclists are currently restricted to using Water Lane but we hope to be able to work with WSCC and Storrington PC to enable a cycle-able route to Downsview Ave through the recently consented new housing development at this location (see next steps below).

Overview of route from central Thakeham to central Storrington 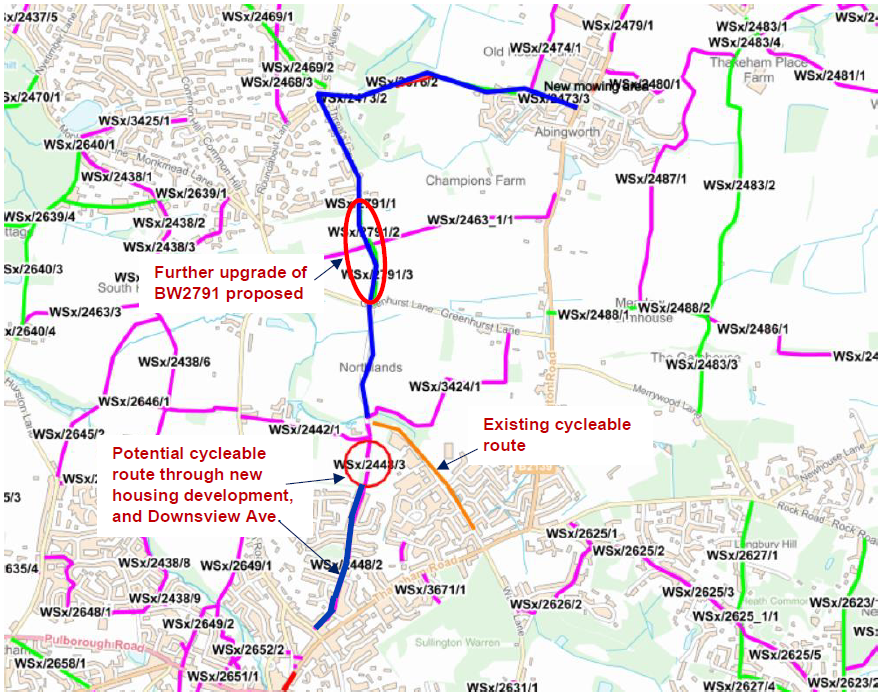 Measuring journey distances from the junction of Abingworth Crescent/B2139 to the jct of Fryern Rd/Thakeham Rd in central Storrington, the road route via the B2139 measures 2.95km, whereas the blue route above measures 3.55km.  The ~500m difference is relatively modest.

Progress of work and next steps

As at December 2020, the main pass of works to upgrade BW2791 has been completed.  We are working with WSCC to find funds to revisit and further improve the safety arrangements where the bridleway meets Greenhurst Lane, and are also currently seeking to persuade Highways to extend the 40mph speed limit to cover this section of the Lane.   We are also in contact with Storrington PC to explore the scope to jointly influence developers and WSCC departments to enable a cycleable route to directly connect the south end of Northlands Lane with Downsview Avenue.