We have now finally received the revised/refined proposal for the Abingworth Phase 2  ‘pinch point’-based traffic calming scheme, which you can see and download below.  The PC will be reviewing this scheme at its Neighbourhood Planning Committee meeting of Monday 23 October (6.30pm, Village Hall).  The feedback that we give to the consultants who have produced the scheme will influence the detail of what is then formally submitted to WSCC Highways for approval.  We want this submission to be made by the end of November, to allow sufficient time for Highways to consider/approve and for the developer to schedule the work for Spring 2018.  Given the long history of resident concerns and the terrible fatal accident in March 2017, the PC is seeking widest possible community comments on the new scheme.  You can give your input either by attending the meeting above, or email clerk@thakehamparish.co.uk  by close of Friday 27 October.  The PC’s planning group will take on board all comments received by then.

b) Scheme drawing  Click below to view the plan; before downloading, be aware that this is a large document and a complex one – reading the detail may require you to enlarge the image in your viewer. 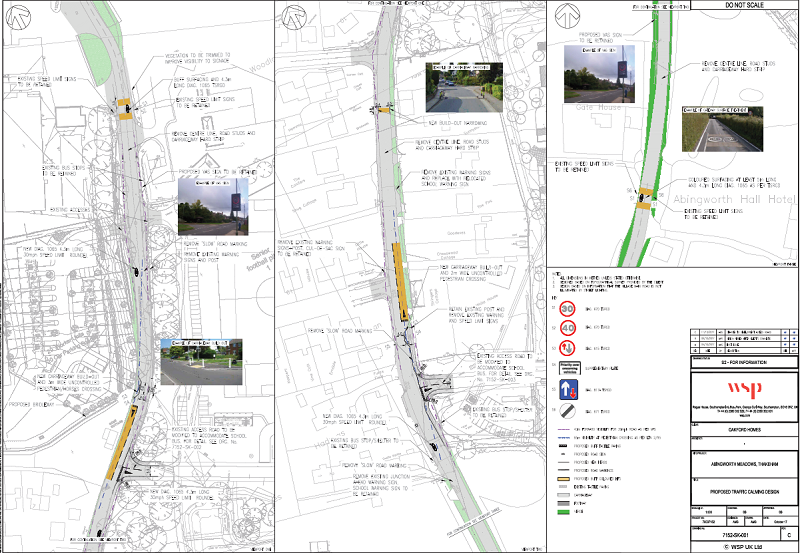 Although the scope of the proposals above are limited to the Abingworth 30mph zone itself, we are also continuing to pursue the extension of the 40mph limit from the northern edge of Storrington over Jackets Hill.  WSCC Highways and Sussex Police have indicated that they are open to this, subject to the lower speed limit being supported by vehicle-activated speed signage, and financial commitment to this was secured from Abingworth Homes as part of planning permission granted for the revised phase 2 housing scheme in April 2017.   We will continue to progress this in parallel with the scheme within the 30mph zone, aiming for implementation in 2018.

We have continued working with the developer and WSCC Highways to deliver the ‘phase 1’ traffic calming measures around the Abingworth 30mph zone that have been approved in principle by HDC planners.  These works comprise: vehicle-activated signs (VASs), village gateway features, and signage upgrades.  Progress has been frustratingly slow due to the many steps required to get relevant Highways approvals and infrastructure in place (e.g. electrical connections to the locations of the VAR signs).  However, we do seem now to be finally on track for this work to happen in November 2017.

Who does what
WSCC Highways are responsible, and are the decision makers, on all matters relating to roads, and road safety.  Where road layout and safety issues are linked to housing/business development projects, that also brings in the Horsham District planning process.  As in the case of the Abingworth development, planning agreements can provide funding and design proposals for certain road improvements, but the detailed design still has to be agreed and signed off by WSCC Highways. That process involves statutory consultations, including with the police, which are led by the developer. The PC’s role is to consult with and, via these processes, act as the voice of the local community to push for the changes that our residents want.