Thakeham Parish Council is working on its response to this important consultation.  The revised Local Plan will guide future developments in the Horsham District until 2036, and it will greatly affect the quality of life and the character of this area.  We encourage Thakeham residents to respond, and offer below the general lines of the Parish Council’s response, which we hope you will agree with and can adapt.  Responses should be made on the official form, preferably via the HDC online response form by 5pm on Monday 30 March 2020.  Copies of the Draft Local Plan can also be viewed at the Council offices, Parkside, Horsham (between 9 am and 5 pm on weekdays), and in all District libraries during normal opening hours. There is also a public drop-in session at Beeson House, Lintot Square, Southwater – Wednesday 4 March, 4–8pm.

Background
(HDC briefing) Horsham District Council is required by Government to provide for an unprecedented increase in the number of homes in the District.  None of the sites in the draft Local Plan has been selected by the Council. The document looks at potential sites that have been put forward by developers and assessed by Horsham District Council for suitability.  There are a number of potential sites listed in the document, but it is anticipated that only some of these will ultimately be allocated for development. The decisions of the Council on sites to be allocated will depend in part on the responses it receives during this consultation. The site assessments have been published so that residents can read about the possible options, see how they have been assessed and give their feedback.  The Local Plan will help ensure that any developments are in suitable locations, supporting the crucial delivery of local job opportunities and are set out in the Plan with contributions from developers to provide community infrastructure and upgrade transport links. Failure to produce a Local Plan will put these vital elements in jeopardy and leave us exposed to unacceptable developments in totally unsuitable locations which none of us want. Details about the Local Plan review process, background documents and timetable is available online at www.horsham.gov.uk/localplanreview

(Parish Council further comments)  HDC is required every 5 years by central government to produce a revised plan geared to delivering a centrally set target for new housing – calculated by a prescribed method. HDC’s current indicated target is considered excessively high; the quota will increase from current 800 new houses per year to at least 965/yr from November 2020. On top of that Horsham is under pressure to accept additional ‘duty-to-cooperate’ numbers from neighbouring districts that can claim that they are unable to meet their own quotas, which could push up the HDC target to 1200 or even 1400/year.   These levels of increased quota have caused extreme concern – generally across local government in the South-East, and particularly in Horsham District.  HDC its challenging its allocation, including the local population projections it is based on, and is being supported by local MPs and Parish Councils, but the outcome is currently uncertain.  However unfair this context may seem, HDC are correct that there is no alternative but to make the least-worst plan to meet the quota that is finally confirmed.  Otherwise the plan will not get inspector approval and without an inspector-approved plan, we will get significant development through the planning appeals process anyway but without being able to control the locations, and with greatly reduced funding for community infrastructure.

1. To strongly object to the proposed re-classification of Thakeham in the HDC Settlement Hierarchy (LP Policy 2), from a ‘small’ to a ‘medium’ village
This is potentially important, as being re-categorised as a ‘medium’ village can only increase future additional planning pressures in this area, but in any case as our analysis shows there is no evidence base for Thakeham outgrowing the ‘small village’ category.  The key points being:

a) there is no scope for further substantial housing in the immediate area (as confirmed by HDC’s own consultation site assessment plans);

b) central Thakeham has a barely-existent bus service (see (3) below for detail); and

c) lack of shopping facilities in the area;  the planned shop at Abingworth Meadows has yet to open and establish itself.  Although a very welcome addition to local facilities it remains a relatively small convenience store – no larger than most other ‘small villages’ in Horsham district already have – and there are no plans or clear opportunities for new supporting retail.

Therefore there is no foreseeable prospect of central Thakeham ceasing to meet HDC’s criteria and description of a ‘small village’ i.e. our residents will remain ‘reliant on larger settlements to access most of their requirements’.

The evidence base in fact shows that there are several other small villages in Horsham District with a better case to become ‘medium villages’ before Thakeham.  Our analysis of ‘medium villages’ also shows that, if Thakeham were to be moved to this category, it would be an anomalously small ‘outlier’, in terms of both population and quality/size of facilities and connections.

2. To argue for reducing the indicative allocation in the draft Local Plan of another 50 houses in central Thakeham (‘Abingworth’).

The draft Local Plan indicates an expectation that central Thakeham (‘Abingworth’ for short) should take an extra 50 houses at two sites, additional to our existing Neighbourhood Plan development site commitments and the actual numbers of houses which HDC have agreed can be built on these. The two new proposed sites are: (a) SA039 North of High Bar Lane and (b) SA513 South of Furze Common Road – located as below. 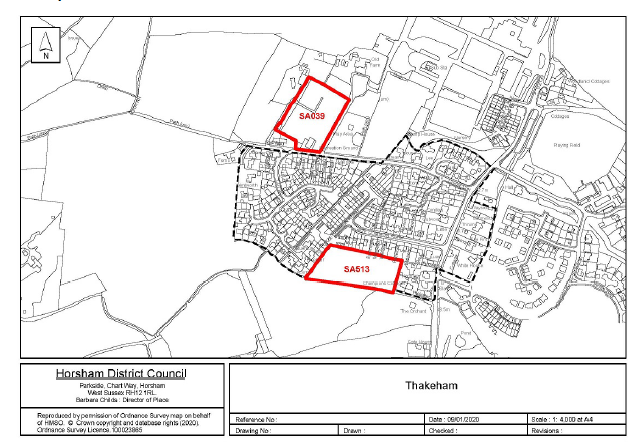 While HDC communications say that ‘no sites are yet allocated’, the reality is that unless cogent planning arguments to the contrary are presented in this consultation, the indicated 50 extra units, probably at these two sites, will become part of the adopted Local Plan.  The Parish’s case for resisting this is that the revised Local Plan needs to take into account the disproportionate volume of new housing that Thakeham is already in the process of absorbing, including significant ‘creep’ of increased house numbers within sites designated in our Neighbourhood Plan.

Absorbing 400 extra houses in the period 2017 to ~2023 (guesstimating the eventual timing of Thakeham Tiles) represents a cumulative increase in Thakeham households of nearly 50% on our 2016 baseline.  No other comparable parish in Horsham District has been subject to this level of proportionate housing growth.   Moreover, the new community facilities that these developments have brought will only bring central Thakeham up to the existing district norm for a ‘small village’.  The scope for further housing growth and capacity of facilities in this area is therefore very limited.

3. The urgent need for Public Transport improvements to be linked to any further housing
Since 2017, the already poor scheduled bus service through central Thakeham has been cut significantly, to the point that there is no bus service that allows residents to make a return journey to Storrington, and only a single early morning and late afternoon service to Horsham.  This forces nearly all resident travel into private vehicles, adding to local traffic congestion and the existing serious air quality problems in Storrington.  Although the local Transport authority is West Sussex County Council, not HDC, the Parish is calling upon HDC to engage robustly on our behalf with WSCC to restore a decent public transport service to central Thakeham as an essential condition of accepting any additional housing. That is, WSCC should restore the subsidy required to run a regular bus service that allows daily commuting from the Abingworth area, to Storrington and Horsham, and to access train connections at Billingshurst.  Funding is potentially available for this via recently-announced additional central government allocations for improving bus services.

4. To work with HDC planners to identify the most optimal extra site(s) for any extra housing
The Parish Council is conscious that the sites currently indicated (see 2 above) were not both scored as ‘first reserve’ in the site assessment scoring for our current Neighbourhood Plan, and our position is that if a different site were to emerge during or after the consultation period, which scores better under the latest HDC site assessment method, then it should be substituted.

5. To undertake further review and comment as appropriate of the adequacy of other updated Local Plan policies, including with regard to:

Residents can of course comment on wider aspects of the plan, including the location of large (over 1000 homes) strategic sites and write to their MP to ask that the Government revise their national housing policy to reduce the requirement to build so many houses.