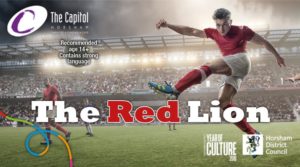 Small time semi-pro football, the non-league. A world away from the wealth and the television cameras. A young player touched with brilliance arrives from nowhere. An ambitious manager determines to make him his own. And the old soul of the club still has dreams of glory.
A haunting and humorous new play about the dying romance of the great English game – and the tender, savage love that powers it.
The Red Lion was first presented in the Dorfman auditorium of the National Theatre, London, on 3rd June 2015 and was subsequently revived at The Trafalgar Studios in 2017. This new production is being produced as part of the Horsham District Year of Culture.
The Red Lion is a hugely entertaining play with great humour. Gathering many 5* reviews in its previous two outings this is the ideal piece of theatre for regular playgoers and football fans alike.

There are no upcoming events.

Our featured business is Extension Planner, a Thakeham based Architectural design consultancy. Find out more here!

Do NOT follow this link or you will be banned from the site!