According to Ekwall’s Dictionary of English Placenames  (1960) the first recorded mentions of this parish are Tacaham in 1073 and Tacheham in 1167, which may mean ‘thatched homestead’. Strawberry Lane, which runs from Thakeham Place Farm to Little Thakeham, is part of an old drove road between Horsham and Sullington which existed in Saxon times but is probably much earlier.

The age of our village is indicated by the “hollows” or sunken lanes in the area, but people like to see history in our buildings, and several in Thakeham have not changed very much for centuries – indeed, most of those shown on the section of the 1843 Tithe Map (above) survive intact.

Entering The Street (the historic centre of Thakeham parish) at the west end, you will first see the Mansion House on your right, then Oakridge – previously named Martins – and The Old Rectory to your left, and Holmwood, Barn Cottage and The Old Post Office to your right  (see pictures below). 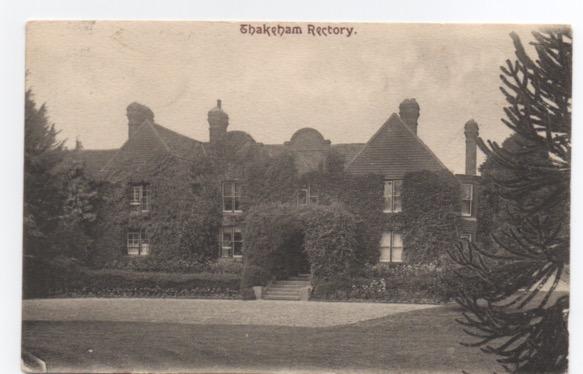 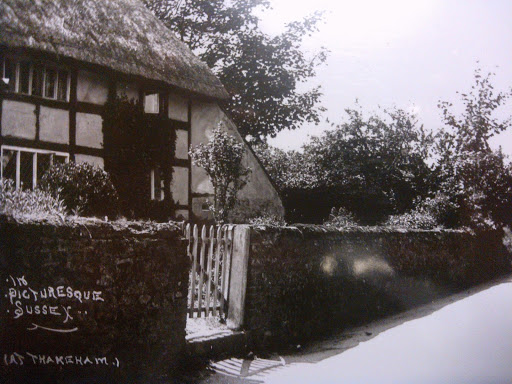 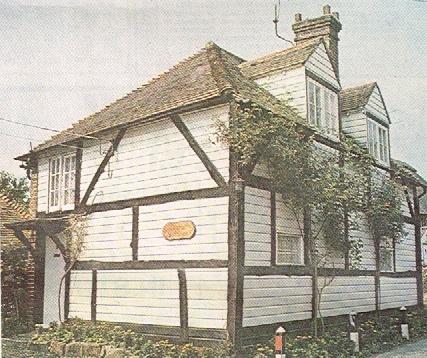 A little further on, you see the eastward perspective down The Street which recurs in many Edwardian and Georgian postcards and remains a popular view for artists and photographers today (see below, and our Places of Interest pages for more examples). 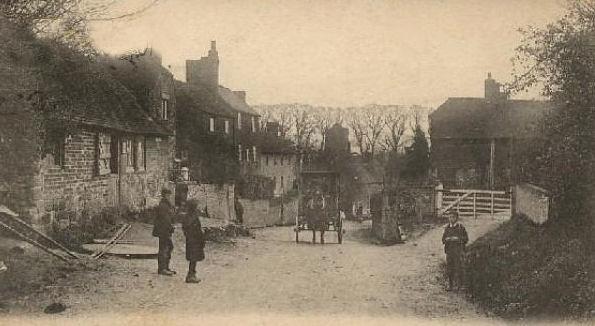 The dwellings included in the photos above are the Old Forge, Cootes, the 3-storey Workhouse (burned down in the C20th and replaced by smaller cottages), Mouse and Bottom Cottages and Fran Cottage on the left, and the White Lion Inn on the right (tucked out of sight is Appletree Cottage, just above the Inn).

A bit further down, well past the pub, if you turned around you’d see the school to your right; Fran Cottage, fronting the lane, is the next building before Bottom Cottage (below left).  The other picture is of the school pupils and their long-term Head, Mr Rapley (at the back on the left). 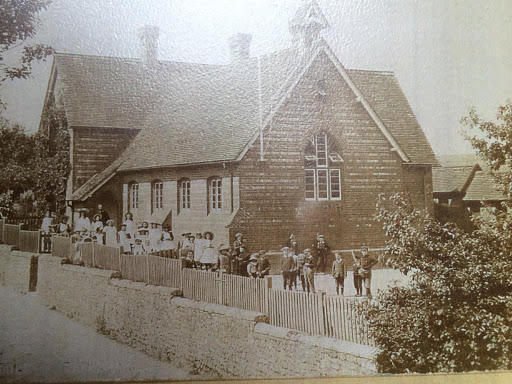 Towards the bottom of The Street, another smithy (now Church View) is on the right, and Gate Cottage at the farm entrance just as you reach Cumberland House, and turn left into Cray’s Lane and see St Mary’s Church ahead, and the one-time village green (now a car park) on your right.

As well as the two forges, several houses have changed their uses over the decades: Fran Cottage (nearly opposite the White Lion) was a drapers and grocers which became the first post office in 1867, until that function moved in 1900 up to the Old Post Office on the other side of The Street, which was also once a School for Young Ladies, and then a village shop. Cumberland House had various functions including inn, bakery and workhouse; Martins and the Old Rectory at the top of The Street once formed a single spacious rectory. The White Lion Inn is described in the Victoria County History as “a 17th-century house converted to double pile and cased in brick c. 1800”. 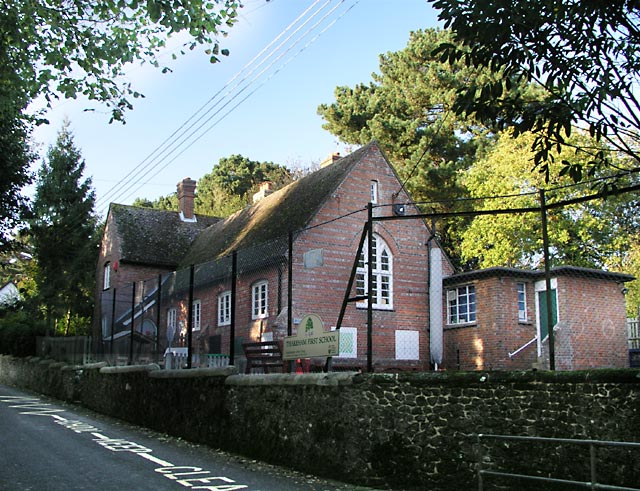 The village school building in The Street opened in 1875 and was used for this purpose until 2017, when Thakeham First School moved to its current Rock Road site and became Thakeham Primary School.  This building is in the process of being turned to residential use.

Many interesting, picturesque and historic buildings exist outside this small village core, as the parish stretches in an elongated rectangle, from Coolham in the north to Sullington in the south, with the B2139 bisecting it.

The partly deep-cut southbound part of this road is said to have been dug out by French prisoners during the Napoleonic wars. Now located within the Abingworth housing development, near Abingworth Hall pond is the ‘Penn Stone’ from which the Quaker William Penn is reputed to have preached around 1790. 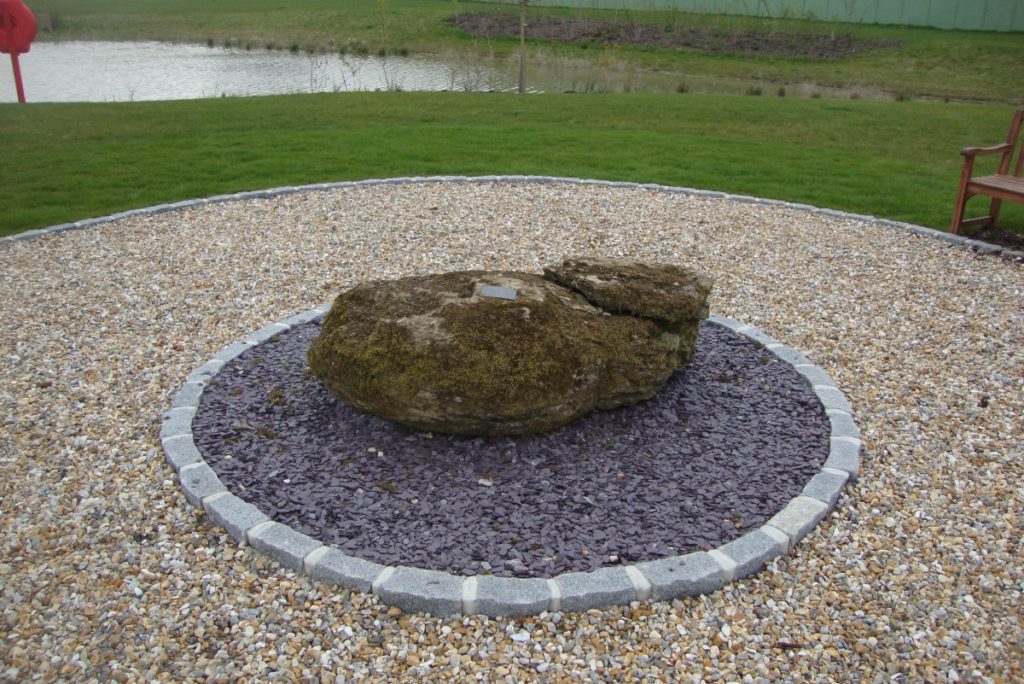 Penn was a founder member of the meeting house at the Blue Idol, Oldhouse Lane, in the north-most part of the parish – though he lived in Warminghurst, to the east of The Street, several miles away. Penn is best known as an author of Pennsylvania’s constitution, and later his name was given to the American colony (somewhat to Penn’s embarrassment) by Charles II, who owed money to Penn’s father.

Some famous (and infamous) people connected with Thakeham include the poet Percy Shelley, who stayed in Thakeham and whose family owned property on The Street; the architect Edwin Lutyens who designed Little Thakeham and its gardens, completed in 1903, and considered one of his best designs. 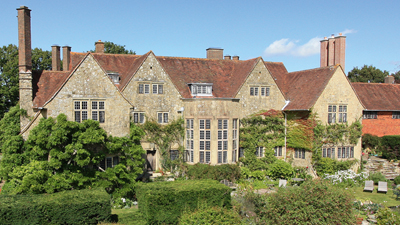 Sir Oswald Mosley – grandad of the 1930s fascist leader – lived briefly at Abingworth Hall around the time of Word War 1; today the Hall is a hotel for groups of Downs walkers.

The war prevented Jomo Kenyatta, later to be Kenya’s president, from returning home after studying in England, so in 1940 he came down to Sussex as a labourer for A.G. Linfield and Sons, market gardeners, at Abingworth, and was put to work in the tomato hothouses, living in the nearby village of Storrington, where he married a local girl, Edna Clarke; in 1943 they had a son, Peter. The accomplished actor Anna Massey, daughter of Raymond and sister of Daniel, was born in Thakeham in 1937.

In 1841 the population of Thakeham was 494 and it was described as an ‘out of the way parish with no resident gentlemen’.  In the 20th Century, houses were built in the southern part of the Parish, including Crescent Rise and the Davis Estate. Following a parish boundary review in 2000, part of Heath Common formerly in Thakeham moved into the Parish of Washington.

We welcome items relating to the parish from historical times to the recent past.  Contact Roger Taylor or Owen Richards if you have any photographs, information or anecdotes you can share, or questions about village history. So far this site contains two examples of interesting anecdotal information: Alan Simmonds’  memoir of his time as an evacuee during WW2, and Jacky Harris’ memories of Goffsland Farm in the 1950s.

Each notable building, space or artefact should have its own record here and we welcome written accounts of houses and other locations from their present or past residents, neighbours or visitors. Our collection is steadily but slowly growing – can you help speed up progress?

Here are links to sources of support for anyone interested in their own house’s or family history or that of Thakeham parish or nearby areas of Sussex: