The RoW routes due to be delivered in and around the Abingworth Meadows development are set out in the map below. The surface of Strawberry Lane is due to be improved (at least the muddiest parts – the detail of what WSCC have required can be seen here; items A +D remain to be completed as at August 2020). As the map shows, there will be other new permissive paths (shown in orange) and the surfaces of existing footpaths will be brought up to WSCC-set standards.

But the main new feature is that walkers, cyclists and equestrians are due to benefit from a major new east-west bridleway route through central Thakeham. The eastern section will link Strawberry Lane to the B2139 through the new development. This will be continued by a further western section that crosses the B2139 and then runs along the north bank of the stream (south of the Monaghans site) before rejoining High Bar Lane next to the existing playground. These works are being undertaken by Abingworth Developments, under planning consents from Horsham District Council and WSCC Rights of Way team (not under the direction of the Parish Council).  After considerable delays relating to the need for legal agreements, as at December 2020 the situation is:

The route of the western bridleway extension (dotted green line) and how it relates to the rest of the Abingworth rights-of-way scheme, is shown below. 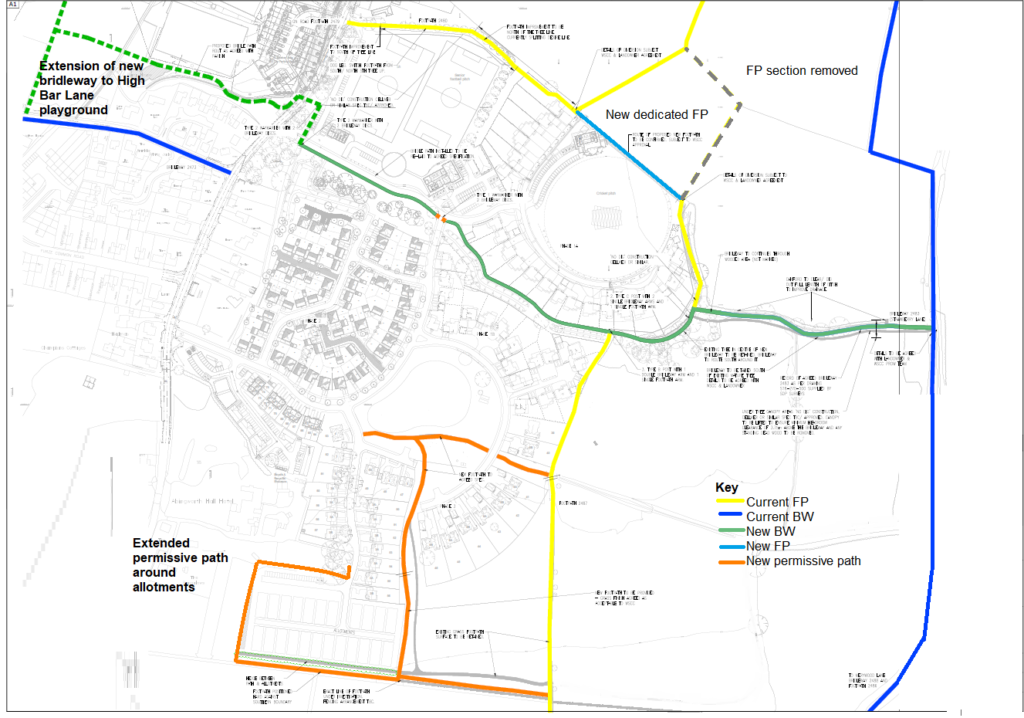 The extended bridleway route will provide a new safer place for users to cross the B2139 (using the traffic calming build-out), and for walkers, cyclists and equestrians to travel separated from traffic for most of the length of High Bar Lane. It will also involve upgrading the surface of the footpath next to the playground, which will benefit walkers and allow cyclists and equestrians to travel northwards through the Monaghans site, and onwards via the bridleway network, avoiding the dangerous narrow section of the B2139 around the junction to The Street. The approved route is shown in more detail below. 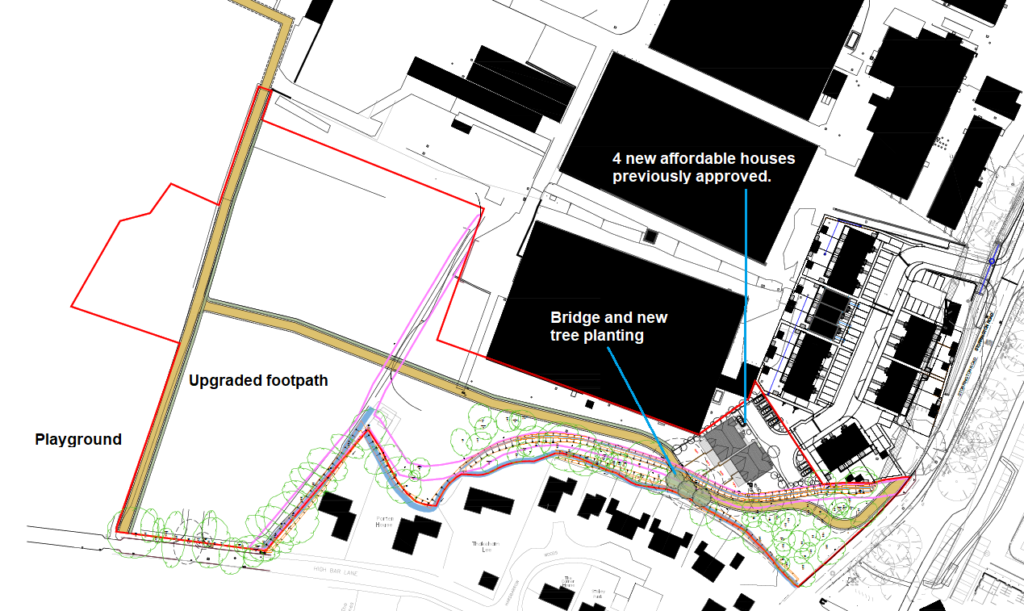 Although the new pathway runs through the existing wooded area at its east end, efforts will be made to avoid unnecessary tree loss.  Unfortunately a number of ash trees on/close to the route are suffering from dieback, and the worst affected near the path route need to be removed.  The scheme does however involve replanting some semi-mature trees to protect the screening of neighbouring gardens.  Works access to construct the bridleway will be off High Bar Lane, near the playground. The need to avoid mud on the roadway is appreciated.  Some noise disturbance to neighbouring residents is also unfortunately inevitable, particularly during the initial tree clearance phase, but we understand that it will be completed as quickly as possible.

The works will proceed when ground conditions and interaction with completion of adjacent extra affordable houses permits. The contact route for any issues arising during the construction process is: abingworthdevelopments@gmail.com

In relation to the new path north of the Abingworth cricket pitch (light blue above) this has now been confirmed as new right of way, with the previous path route section in grey now removed.